All of the crops used in ePURE members’ biorefineries were grown by European farmers. 84.2% of the renewable ethanol produced was for fuel use. Of the remaining ethanol production, 9.4% was for industrial use including hand sanitiser, and 6.4% was for food and beverage use.

The audit also showed record-high GHG-saving performance of ePURE members’ ethanol – 77% on average compared to fossil petrol – making its use essential to transport decarbonisation by reducing emissions from the petrol and hybrid cars that will predominate on Europe’s roads for many years. 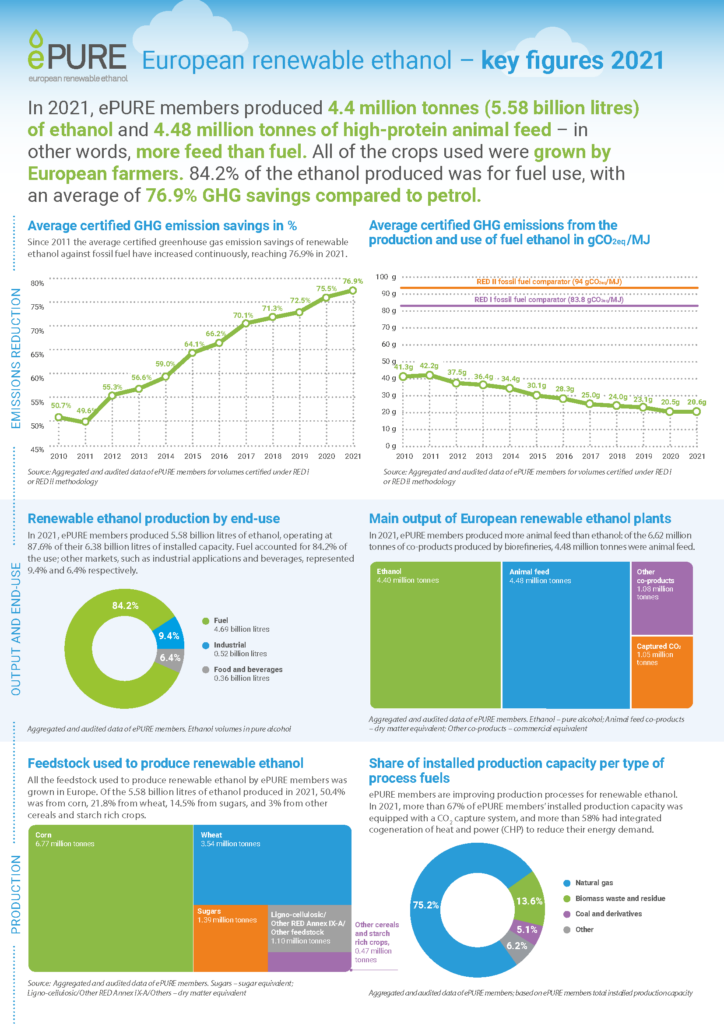 For context, ePURE members' ethanol production in 2021 required less than 1.8 million hectares (Mha) of European arable land, equivalent to only 1.7% of the total arable land of EU27 and the UK – more than 3 times less than the current area of set-aside and fallow land in the EU27. The land use for ethanol crops is even more negligeable factoring in the co-production of animal feed together with renewable ethanol. Out of the 1.8 Mha, only about 1.1 Mha is attributable to the sole production of ethanol, which is 1% of the total arable land of EU27 + UK.

“These new figures confirm that when it comes to European renewable ethanol, the ‘food vs fuel’ myth is and always has been false,” said ePURE Director General David Carpintero. “EU biorefineries turn sustainably grown European crops and residues into food, feed and renewable fuel. Capping the use of such sustainable crop-based biofuels would have dire consequences for Europe’s goals for energy independence, food security and emissions-reduction.”

ePURE represents 39 members (including 20 producers) with around 50 plants across the EU and UK. The statistics were compiled from ePURE members and certified by auditing firm Copartner.